What is a Patent Foramen Ovale

A Patent Foramen Ovale (PFO) is known as a hole in the heart. PFOs occur at birth and can be closed by Dr Peter Fahmy by using a catheterisation procedure. In fetal circulation, the foramen ovale is an opening that allows blood to bypass the lungs and go directly from the right atria to the left atria. Shortly after birth, the higher pressure in the left atria and the lower pressure in the right atria causes permanent closure of the foramen ovale in most people. In approximately 25% of people, the foramen ovale fails to close and could lead to a cryptogenic stroke.

Can a​ closure reduce your risk of having a stroke?

Many times a PFO is not discovered until adulthood. If a doctor found a PFO, it is important to speak with your healthcare professional to see if closing the hole in your heart can help reduce stroke risk.

What is an unidentified stroke?

If you had a stroke with no identifiable cause, your doctor might conclude that you have a PFO. If this has occurred, your PFO would have caused a blood clot to pass from the right side of your heart to the left side of your heart, blocking a blood vessel that supplies the brain and causes a stroke.

Catheter-based procedure to close the PFO

Surgical closure of the PFO

What are the potential risks of the procedure?

As with any medical procedure, there is a possibility of complications due to the device and/or the procedure. Potential risks include, but are not limited to:

The movement of the device from its position in the Patent Foramen Ovale to other parts of the body may cause you to have a second surgical or interventional procedure. 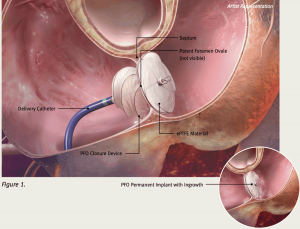